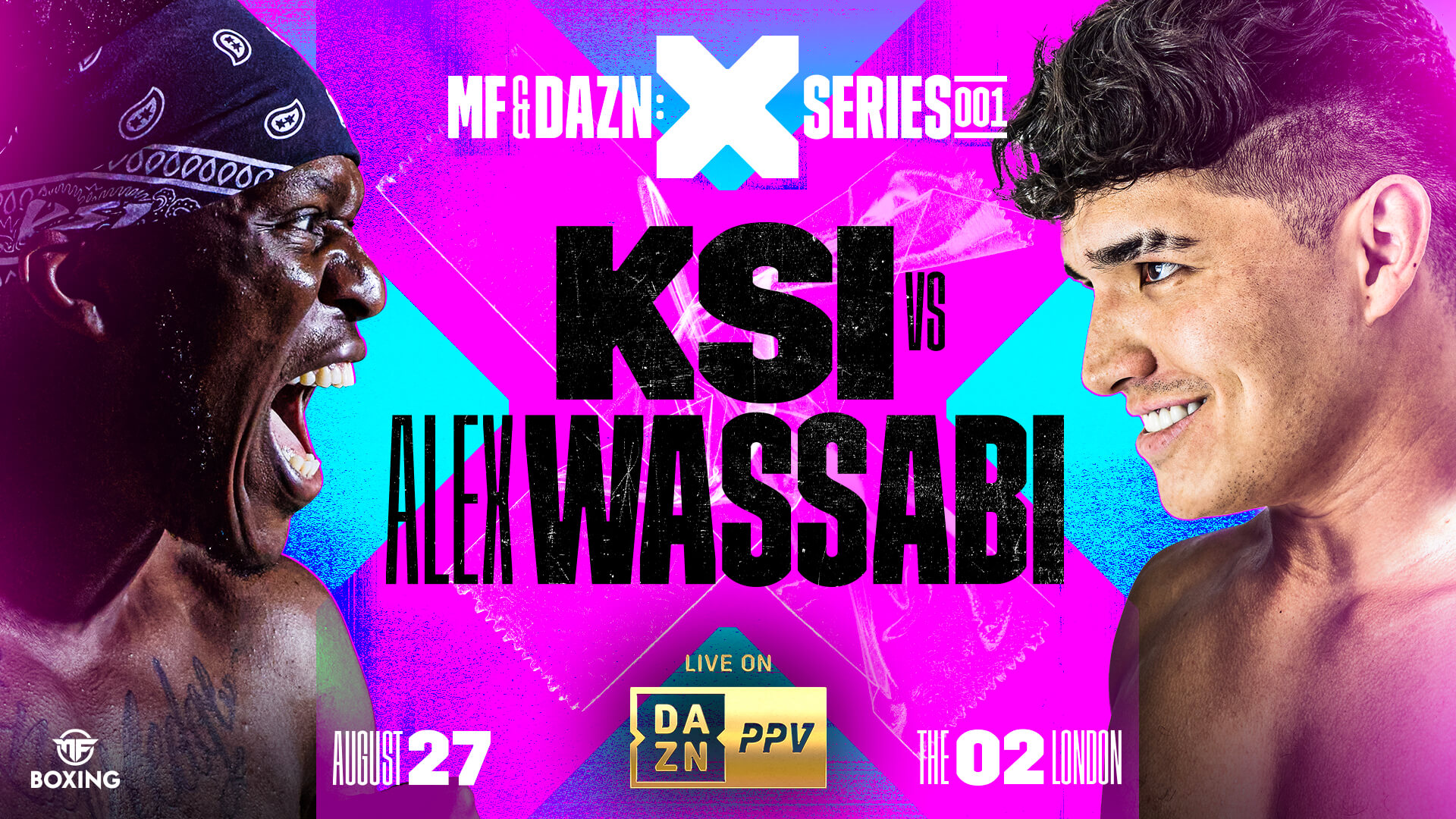 KSI VS. ALEX WASSABI
ON 27 AUGUST AT THE O2, LONDON

Social media megastar KSI and his promotional company Misfits Boxing, in association with the Sauerland brothers, Wasserman Boxing and Proper Loud, unveils a ground-breaking partnership with the DAZN Group. The partnership will launch the new MF & DAZN: X Series – a pioneering new crossover series that will showcase the biggest global names in entertainment, sport, and lifestyle facing each other in blockbuster boxing events. These spectacular fight nights will bring boxing fans all around the world the premium and professional live sports action alongside a supercharged production fit for the stars and icons of the entertainment world and beyond.

The series premiere, MF & DAZN: X SERIES 001, powered by Misfits Boxing, will be headlined by KSI and see the larger-than-life British phenom look to avenge his brother’s loss against long-time rival and American YouTube sensation Alex Wassabi at The O2 on Saturday 27th August.

The new KSI led promotional company, Misfits Boxing, launches after the megastar and his management team, Proper Loud, combined with the Sauerland brothers at Wasserman Boxing. This launch celebrates the forming of a new powerhouse in the boxing promotion company to stage the world’s biggest and best crossover boxing events.

With over 50 million followers across his social media platforms, a number 1 hit album, multiple BRIT Award nominations and an unbeaten record in the ring, KSI is one of the world’s most recognisable faces. His record-breaking foray into boxing commanded global attention when he fought fellow social media megastar Logan Paul live on DAZN in 2019.

With over 18 million followers and 4.5 billion views, Alex Wassabi is one of the most recognized Filipino American content creators of the past 16 years. While Alex originally set out to bring laughter and joy to millions of viewers through his sketch comedy skits, his focus now is firmly on boxing with his first victory coming in March, beating KSI’s younger brother Deji. Alex’s goal is to prove that through discipline, hard work and the love of competition – anything is possible.

KSI, CEO of Misfits Boxing, said “I’m back. After almost 3 years, I have returned to take over once again. First on the list is Alex Wassabi. The one who I’ve laughed at many times on my YouTube channel. The one that thinks he will destroy me at his weight. The one who defeated my brother. I’m here to avenge him (Deji) and show the world why I am a force to be reckoned with. HAHAHAHAHAHAHAHAHAHAHAHAHA”

Alex Wassabi commented “I came to the UK this past March and beat one Olatunji brother and now I’m coming back to finish off the other one all in the same year. Big Deji has no idea what he’s gotten himself into. While he’s been making music, I’ve been in the gym with one thing on my mind, Victory. 2-0 on the way.  Thanks to my team & Most Valuable Promotions for getting this across the finish line.”

President of Misfits Boxing and CEO of Proper Loud, Mams Taylor said: “The demand for this exact thing has grown immensely ever since KSI and Logan Paul locked horns. There is no longer such a stigma attached to public figures putting on a pair of gloves and settling their scores in the ring but an air of fresh excitement. It’s clear most who participate in this area of the sport take their training very seriously and bring the entertainment to another level. Crossover boxing on a big stage like this, getting the limelight it deserves, was the inevitable and natural progression in the evolution of this part of the sport. We are thrilled to be leading the way with it with all we have in store for the near future and beyond. KSI and I knew the appetite for this is only growing. We took our time to get this right and it was essential for us to work with the best partners in the business. Which is exactly what we did by partnering with Wasserman and DAZN. We are so excited to kick off this event on August 27th, it is truly the dawn of a new era for crossover boxing, and you are going to see familiar faces from all areas of entertainment gravitating towards this arena.”

“Misfits Boxing represents a groundbreaking collaboration which will dominate the massively growing crossover boxing industry,” said Kalle Sauerland, Head of Global Boxing at Wasserman Boxing. “We enter this new world already equipped with the best team in the business. We have all the expertise of showcasing the best worldwide boxing events and mixed with the unrivalled talent of KSI and Proper Loud, there are truly no limits to what we can achieve together. I am as excited as the rest of the team, and all associated with Misfits Boxing and the MF & DAZN: X Series, and the anticipation of our debut event is thrilling.”

Hitting number 1 in the UK with his latest album All Over The Place and Dissimulation becoming the biggest selling debut in 2020 which made him the UK British Breakthrough Artist of the Year, there is no slowing down for all-round entertainer, KSI. He’s received 8 Top 10 singles which includes BRIT-nominated hit songs and tracks from Craig David and Anne-Marie to Rick Ross and Lil Wayne. He’s also due to appear in his own feature-led documentary executively produced by Louis Theroux due November 2022 for Amazon Video. KSI has sold-out nationwide tours, headlined The SSE Arena, Wembley and performed on main stages at Reading & Leeds, TRSNMT, Parklife, Capital’s Jingle Bell Ball at The O2, Capital’s Summertime Ball at Wembley Stadium and Radio 1’s Out Out Live. He has also performed The Jonathan Ross Show, The Late Late Show with James Corden, The One Show, Top of the Pops, Sunday Brunch, Pride of Britain, GB Homecoming, The Lateish Show with Mo Gilligan, and the inaugural Earthshot Prize. He has been seen on the cover of The Sunday Times Magazine, The Sunday Times Culture, The Observer Magazine, Wonderland, Music Week and Notion to name a few. Instagram | Twitter | Spotify | YouTube | Website

Misfits Boxing is a new radical and revolutionary promotional partnership between megastar KSI, Proper Loud and Wasserman Boxing, coming to take over and make waves within the crossover boxing industry. The collaboration between Misfits Boxing and DAZN for the MF & DAZN: X Series is set to pave the way for the future of crossover boxing to provide the highest calibre of events within the genre, across the whole of the sports and entertainment industry. Stars from all corners of the globe and all formats of the entertainment world will be putting their will to the test, as Misfits Boxing guarantees the greatest crossover boxing spectacle the world has ever seen.

Proper Loud prides itself on having close relationships with its roster and taking the time to understand its artist’s individual needs and goals. Proper Loud’s mantra is to be recognized for their integrity, fairness and making great art. www.properloud.com

Wasserman is a partner to the world’s most iconic brands, properties, and talent in their endeavours across sports, entertainment, and culture. Our purpose is to transform the businesses and careers of clients. Founded in 2002 and headquartered in Los Angeles, Wasserman operates globally in more than 20 cities, including London, New York, Toronto, Raleigh, Carlsbad, The Hague, Portland, and Shanghai. In 2021, Wasserman acquired Team Sauerland, one of the world’s leading boxing promoters, to form Wasserman Boxing, a new global force in the world of boxing. Learn more at TeamWass.com.

The 27th August blockbuster will be available to subscribers around the world on DAZN. In the U.S., Canada, the UK, and Ireland, the event will be offered on DAZN Pay-Per View (PPV).