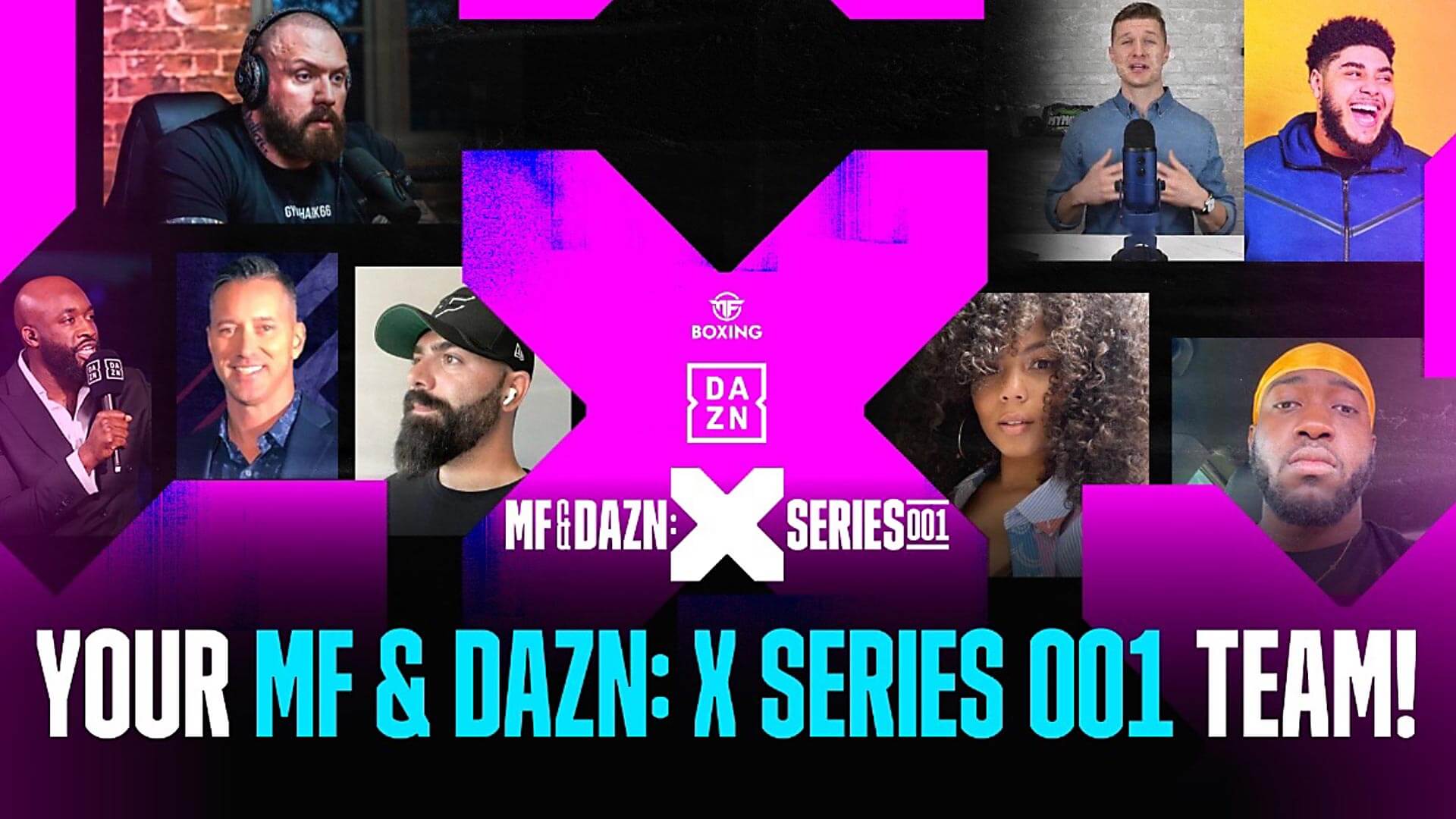 ON-AIR TALENT ROSTER UNVEILED FOR MF & DAZN: X SERIES 001, AHEAD OF KSI VS. ALEX WASSABI AT THE O2 IN LONDON ON AUGUST 27

Following the recent announcement of the launch of MF & DAZN: X Series – the pioneering new crossover series in partnership with social media megastar KSI and his promotional company Misfits Boxing and DAZN, in association with the Sauerland brothers, Wasserman Boxing and Proper Loud – we are thrilled to announce the on-air talent roster that will bring fight fans around the world all the ringside action.

The series premiere, MF & DAZN: X SERIES 001, will be headlined by KSI and see the larger-than-life British phenom look to avenge his brother’s loss against long-time rival and American YouTube sensation Alex Wassabi at The O2 on Saturday, August 27. The blockbuster event will be available around the world on DAZN and on DAZN PPV in the U.S., Canada, UK, and Ireland.

In host position will be award-winning British presenter, YouTuber, and radio personality Ade Oladipo. He is most known for being the co-host of ‘The DAZN Boxing Show’ as well as featuring on DAZN’s live boxing broadcasts as a ringside reporter as well as a regular on DAZN’s global football shows. One of the brightest new voices in the UK media space, he also presents his own football show on talkSPORT. A YouTube influencer in his own right with a boxing channel boasting more than 28,000 subscribers and 10,000,000 views, Oladipo is superbly placed to host this series premiere broadcast that will reach a new, non-traditional audience.

The main event commentary team will feature a trio of familiar and new faces alike. Todd Grisham, seasoned on-air fight sports announcer and long-time fixture of DAZN’s on-air talent team for global boxing events, will lead the team. True Geordie, British YouTuber, boxing and MMA aficionado, and host of his eponymously-named and wildly popular True Geordie Podcast will call the fight alongside Grisham. Rounding out the pundit team will be Keemstar, American YouTuber and online news reporter best known for his DramaAlert channel.

Reporting from ringside will be Wade Plemons, American YouTuber behind the popular boxing and MMA podcast The W.A.D.E. Concept. Joining him will be Joelah Noble, London-born and Brooklyn-raised broadcaster and presenter who most recently hosted the Women’s Euros Lionesses Live show on the England Football channels. She will soon be seen as the host of up-and-coming UK dating show ‘Are You The One’ on MTV.

Kicking off the night, The DAZN Boxing Show will bring all the lead-up hype ahead of the main event. British rapper, songwriter, DJ and television personality BigZuu and American YouTuber JiDion whose channel has amassed more than 5.5 million followers and 420 million views will serve as the celebrity guest hosts for a special pre-event two-hour countdown show.

MF & DAZN: X Series fight nights will bring boxing fans all around the world the premium and professional live sports action guaranteed with DAZN alongside a supercharged production fit for the stars and icons of the entertainment world and beyond. The series premiere, MF & DAZN: X SERIES 001, will be headlined by British phenom KSI and American YouTube sensation Alex Wassabi on Saturday, August 27. Joining the main event on the undercard will be thrilling matchups featuring other social superstars, including Faze Temper, Deji, Fousey, Sam Hyde, IAMTHMPSN, and more big names to come.

Limited tickets are on sale now at Ticketmaster.co.uk and AXS.com

ABOUT KSI
A pioneering, YouTuber (fourth most followed channel for a British artist behind Ed Sheeran, One Direction and Adele) approaching 20 billion cumulative views, his 40.8 million subscribers know him as a creator, an artist, a mate who brings the passion (and the jokes) to whatever he does. He’s a businessman with a portfolio of interests, from owning his own music label, The Online Takeover and his own boxing promotions company, Misfits Boxing to one of the fastest growing beverages, his Prime Hydration drink (recently partnered with Arsenal FC) is set to surpass $140 million in revenue in its first year. As a performer and all-round entertainer, he can light up stages (Reading, TRNSMT, a Wembley headline) and screen: an upcoming documentary for Prime Video, produced by Louis Theroux, promises to lift the lid on the extraordinary life of the 29-year-old from Watford. And as a boxer, the amateur-turned-professional fighter is undefeated, with his last bout, against Logan Paul at Los Angeles Staples Centre in 2019, a global pay-per-view knockout. 27th August will mark his return to the ring when he steps out at London’s O2 to fight Alex Wassabi. As a musician with over 12 million monthly Spotify listeners, he’s also well-versed in coming out on top. His second album, summer 2021’s All Over the Place entered the charts at #1, an emphatic follow-up to the previous year’s debut, Dissimulation, a #2 hit which was the biggest selling debut album of 2020. In rapid succession there’s been a flurry of hits, on his own merits (making him the British Breakthrough Artist of 2020) and with others (Don’t Play with Anne-Marie, Lighter with Nathan Dawe), making for eight Top Ten singles in total. As prolific as he is innovative, KSI was the only artist to be nominated twice in the Song of the Year category at the 2022 Brit Awards. That’s KSI in 2022: in the ring and in the charts, he’s punching well above his weight. Get ready for his next knockout.

ABOUT MISFITS
Misfits Boxing is a new radical and revolutionary promotional partnership between megastar KSI, Proper Loud and Wasserman Boxing, coming to take over and make waves within the crossover boxing industry. The collaboration between Misfits Boxing and DAZN for the MF & DAZN: X Series is set to pave the way for the future of crossover boxing to provide the highest calibre of events within the genre, across the whole of the sports and entertainment industry. Stars from all corners of the globe and all formats of the entertainment world will be putting their will to the test, as Misfits Boxing guarantees the greatest crossover boxing spectacle the world has ever seen.

ABOUT PROPER LOUD
Proper Loud prides itself on having close relationships with its roster and taking the time to understand its artist’s individual needs and goals. Proper Loud’s mantra is to be recognized for their integrity, fairness and making great art. www.properloud.com

ABOUT WASSERMAN
Wasserman is a partner to the world’s most iconic brands, properties, and talent in their endeavours across sports, entertainment, and culture. Our purpose is to transform the businesses and careers of clients. Founded in 2002 and headquartered in Los Angeles, Wasserman operates globally in more than 20 cities, including London, New York, Toronto, Raleigh, Carlsbad, The Hague, Portland, and Shanghai. In 2021, Wasserman acquired Team Sauerland, one of the world’s leading boxing promoters, to form Wasserman Boxing, a new global force in the world of boxing. Learn more at TeamWass.com.

The blockbuster event will be available around the world on DAZN and on DAZN PPV in the U.S.